Children Are Forever (All Sales Are Final!) 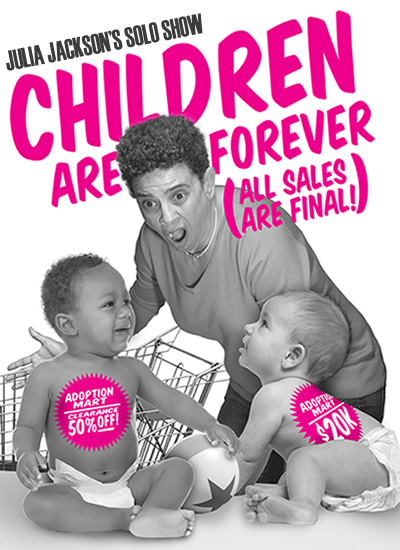 Julia never bought a baby before. Okay, she’s adopting, but the agency sure makes her feel like she’s buying a baby. Couples competing in the free market of love. Bad ovaries but good credit? Step right up! Did you know some kids are discounted? A black baby—which is what Julia and her wife are seeking—costs 1/2 of a white baby. Almost makes Julia and Amy want to run out and start a chapter of the Black Panthers – and Amy’s white!

The one saving grace is that the waiting time for adopting a black child is six months instead of the two years it takes for a white baby. Oh wait, a gay couple? Make that a year. What’s that? Julia is a recovering alcoholic? And she’s insisting on including that info in their Dear Birth Mother letter? Make that anywhere between 2 years and… Hilary Clinton’s second term!

But only five days after signing the contract at the adoption agency, a bomb drops…

A birth mother has chosen Julia and Amy to raise her newborn baby daughter. And by the way, she’s in labor. In Atlanta. Good news abounds.

While this show clearly addresses some serious themes, in the hands of actor/writer Julia Jackson, and her directors W. Kamau Bell and Coke Nakamoto, “Children are Forever (All Sales are Final!),” is also a hilarious, unvarnished depiction of the adoption industry. It’s also a snapshot of life as we know it in the Bay Area. Which is different. It’s easy to forget how different. Until you visit another part of the country.

Julia Jackson (actor/writer) is a professional comedian who has performed at the Edinburgh Fringe Festival and was a semi-finalist at the San Francisco International Comedy Competition. W. Kamau Bell (original director) wrote and performed the solo show “The W. Kamau Bell Curve: ending racism in about an hour” which won high praise from the media and was a popular success. It was also the basis for the television series “Totally Biased” which Kamau hosted, wrote for and co-produced with Chris Rock. Kamau has been honored as San Francisco’s Best Comedian by 7X7 Magazine, the San Francisco Bay Guardian and the SF Weekly. Mary Guzman (director) is a film and stage director. Her short film, “The Wait”, was an official selection of the 2011 Frameline Film Festival.